Decided to relax on the morning before the drive back to Bangkok, and to make the most of the facilities at the 'Float House'.
What a lovely hotel, in a great setting! Nestling on the banks of the river Khwae, the hotel consists of a number of chalets on floats, all strung together in a line. Each one finished to a high standard inside giving the most relaxing atmosphere. It's great to be rocked to sleep to the gentle waves created by the river's flow. 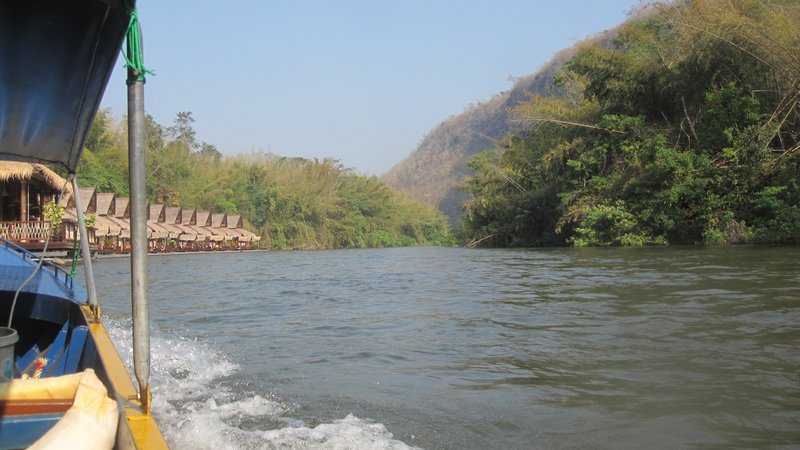 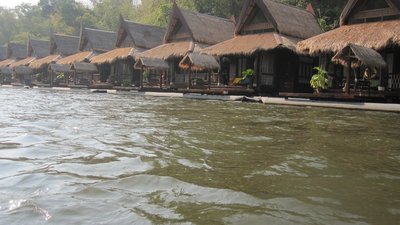 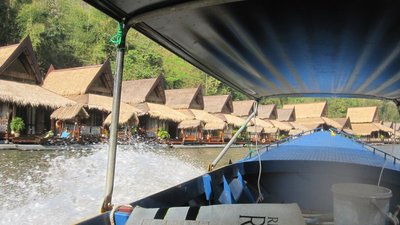 After a couple of hours sitting reading on the terrace outside the cabin, what better than to jump into the river for a cool-down?! So, once again wearing life preservers, we jump into the river and are carried at break neck speed in the fast current, to the last of the hotels floating platforms, where one has to quickly get hold of a rope of buoys attached to the platform in order to be able to stop and grab the waiting ladder and climb out of the river. If the rope is missed then theres the risk of being carried down-stream some distance before a long-tail boat could come to the rescue! After 3 such runs, it is time for lunch.
Then we are back on the road for our return drive to Bangkok and on the way we stop off at a Bridge over the River Khwae. 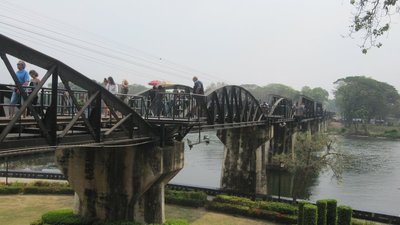 My use of the indefinite article in the last sentence is intentional:
The Bridge on the River Khwae no longer exists. Actually, it didn't exist in the first place...
When the Burma/Thailand railway was built during WWII, it ran alongside the river rather than crossing it. The bridge from the film made so famous by the David Lean/Alec Guinness movie, was made of wood and was built alongside the iron bridge as an aid to construction and was destroyed once no longer needed.
However, the river over which the bridge was built during the war, was the Mae Klong and not the Kwai (spelling as per the film). You following?
After the film's success, tourists flocked to the area to see the 'bridge' that never was. So, in a glorious example of life imitating art, the Thai authorities renamed a stretch of the Mae Klong, as the river Khwae
The site of 'real' iron and stone bridge, is now a bustling tourist destination with a small market at one end, opposite a small platform that serves as the local station. Restaurants adorn the banks and one is constantly approached with offers of long-tail boat rides along the river. A far cry from the sober, understated memorial at Hellfire pass, but nonetheless an important reminder in its own right of the events in that region during the Japanese occupation.
We arrive in Bangkok with a couple of hours to spare before we make our way to the airport and our flight to Heathrow.
I plan to publish just one more blog entry before I finish...see you then

Previous Next Table of contents

Comments on this blog entry are now closed to non-Travellerspoint members. You can still leave a comment if you are a member of Travellerspoint.

If you aren't a member of Travellerspoint yet, you can join for free.